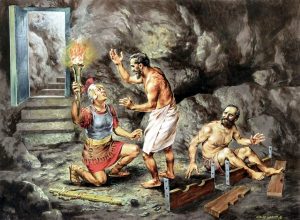 The jailer called for lights, and rushing in, he fell down trembling before Paul and Silas. Then he brought them outside and said, ‘Sirs, what must I do to be saved?’ They answered, ‘Believe on the Lord Jesus, and you will be saved, you and your household.’

Whilst they were still in Philippi, Paul and his companions came across a young woman possessed with an evil spirit. They healed her, but in so doing, prevented her from being able to carry on earning her living of predicting the future. Angered by this loss of a lucrative income, her owners set out to seek revenge and had Paul and Silas convicted for creating a public disturbance. Paul and Silas were flogged and imprisoned. Despite the severity of the physical punishment and the difficult conditions in which they were imprisoned, Paul and Silas still prayed and gave praise to God. Whilst they were singing and praying, an earthquake caused the prison doors to open and chains to fall from all the prisoners. The jailer, presuming that all the prisoners had escaped, was about to take his own life. This would most likely have been preferable to the humiliating and painful death that would have been exacted by the authorities. Paul called out to tell the jailer that no-one had escaped. Such was the effect of the whole experience on the jailer that he became a believer and was baptised along with his household. The story raises questions, not least why the other prisoners did not take the opportunity to escape and why Paul and Silas as Roman citizens did not claim their entitlement to exemption from such punishment. However, what is clear, is the ability of the Gospel message to reach all kinds of people and the impossibility of suppressing this message.

Pray today for all who are unjustly condemned or imprisoned.