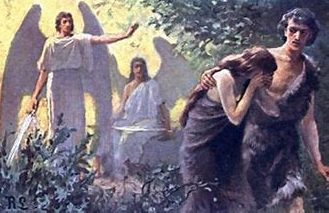 And the Lord God made garments of skins for the man and for his wife, and clothed them. Then the Lord God said, ‘See, the man has become like one of us, knowing good and evil; and now, he might reach out his hand and take also from the tree of life, and eat, and live for ever’— therefore the Lord God sent him forth from the garden of Eden, to till the ground from which he was taken. He drove out the man; and at the east of the garden of Eden he placed the cherubim, and a sword flaming and turning to guard the way to the tree of life.
Genesis 3: 9-24, NRSV

As we heard in yesterday’s reading, after eating from the forbidden tree, the man and woman try to hide from God. God comes looking for them and finds them. God offers the man and woman the chance to admit to what they have done but instead of “owning up” they both make excuses and try to lay the blame elsewhere. God then proceeds to issue punishments to the serpent, the man and the woman and they are to be banished from the garden. Their previously blissful life is to become one of pain and drudgery. The punishments may seem extreme to our way of thinking but the story is not without hope. God foretells how the woman’s offspring will crush the head of the serpent and how the offspring of the serpent will strike at the heel of the woman’s offspring. Many see this as a prophecy that Satan, as symbolised by the serpent, will always be the enemy of humankind. More specifically, it can be seen as a foretelling of how Satan will “strike at the heel of Christ” but that Christ will have greater dominance by crushing the head of the serpent.

The final act of God before sending the man and woman away from the garden also offers hope. We are told that God made them clothes out of skins. Despite their disobedience, God still cares enough for these people to send them out with some measure of protection and care.

Pray today for anyone who feels the need to hide in shame from God and consider what you could say if the opportunity presents.