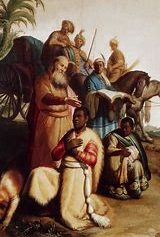 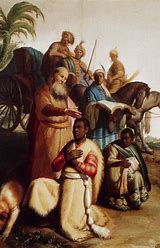 Then an angel of the Lord said to Philip, ‘Get up and go towards the south to the road that goes down from Jerusalem to Gaza.’ (This is a wilderness road.)

Philip was likely to have been confused by the angel’s instruction to follow a desert road that led to a long since destroyed city. However, his obedience to this unlikely prompting led to a remarkable event. Philip met with an Ethiopian official; the chief treasurer to the Ethiopian queen. This was a man of some authority and education but as a eunuch, he was forbidden from participation in temple rituals and barred from from full membership of the Jewish community. However, he was a man clearly inspired by and wanting to develop his understanding of scripture. When Philip met him, he was reading from the prophet Isaiah and he asked Philip to guide him in understanding what he was reading. Philip found in this official someone open to and ready to receive the Christian message – so much so that when they came near to some water, the official asked for and received Baptism. From its beginnings in Jerusalem, the Christian message was moving ever outwards and witnessing to the fact that the Good News was for all.

Reflect on the opportunities you may have to help others to grow in faith.

Image – The Baptism of the Eunuch – Rembrandt