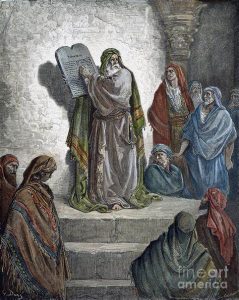 Ezra opened the book in the sight of all the people, for he was standing above all the people; and when he opened it, all the people stood up. Then Ezra blessed the Lord, the great God, and all the people answered, ‘Amen, Amen’, lifting up their hands. Then they bowed their heads and worshipped the Lord with their faces to the ground… So they read from the book, from the law of God, with interpretation. They gave the sense, so that the people understood the reading.

The Book of Deuteronomy laid down the expectation that there should be a renewal of the Covenant every seven years during which the people should be reminded of the Law by which they were to live. On this occasion the duty fell to Ezra, the priest who had been responsible for having the temple rebuilt and for bringing God’s people back to the practice of worship. It would seem that the people welcomed this occasion since everyone – “men, women and children old enough the understand” had gathered to hear the word. They listened attentively for about six hours and then continued to listen as the Law was explained to them. We are told that the people were in tears as they listened – perhaps mindful of their previous infidelity and waywardness. However, Nehemiah, who was also involved in the rebuilding of Jerusalem, told the people that this was not an occasion for tears but for celebration. They were to go off to eat and drink and celebrate but also to make sure that the needy could also join in with the celebration.

Try to listen attentively to God’s word in today’s readings.

Image – Ezra Reads the Law to the People – Gustave Doré