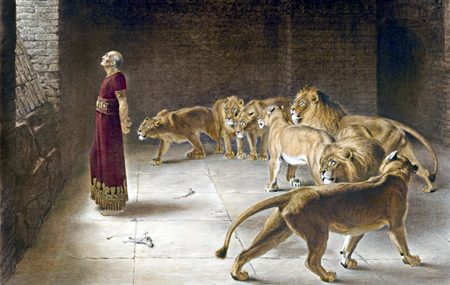 ‘I make a decree, that in all my royal dominion people should tremble and fear before the God of Daniel: 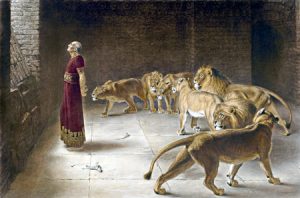 For he is the living God,
enduring for ever.His kingdom shall never be destroyed,
and his dominion has no end.He delivers and rescues,
he works signs and wonders in heaven and on earth;for he has saved Daniel
from the power of the lions.’

This declaration by King Darius came after Daniel’s deliverance from the lion pit. We are told earlier in the reading that the king had reluctantly sent Daniel to the lions’ pit having been persuaded by opponents of Daniel that he had disobeyed the king. Daniel’s “crime” was that he had refused to follow an edict of the king forbidding prayer to anyone but himself. Daniel had persisted with his customary prayer to God and although the king did not wish him to die, he felt forced into conformity with the law. Daniel was therefore thrown into the pit. The king told him that God would have to save him. After a troubled night, the king returned to the pit to find Daniel unhurt. Daniel claimed protection by an angel since he had done no wrong. The king ordered his release and had Daniel’s enemies thrown into the pit instead before making the decree in which urges all to honour the “God of Daniel”.

Pray for those subject to unjust treatment because of their religion.