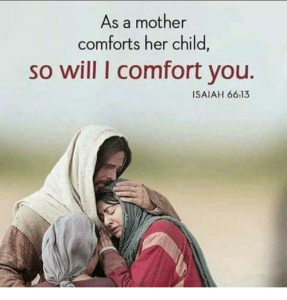 For thus says the Lord:I will extend prosperity to her like a river,
and the wealth of the nations like an overflowing stream;and you shall nurse and be carried on her arm,
and dandled on her knees.As a mother comforts her child,
so I will comfort you;
you shall be comforted in Jerusalem.

Over a period of several decades, the people of Jerusalem had suffered greatly. Their city was under siege and many were killed or starved to death. Those who survived were exiled to Babylon where they suffered many years of hard servitude. Eventually the right conditions allowed them to return and to begin the slow and challenging process of rebuilding their city and temple. It is clear that God also wants to see the renewal and rebuilding of the people as well as their buildings. God’s concern for the people is likened to that of a mother for her child. After their many years of struggle and desperation, they will now be consoled and comforted by a most tender and loving parent who wants only the best for them. They will again become a people who will flourish and live in peace.

Be aware today of the people who may need to feel God’s love and nurture through you.