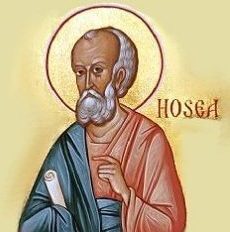 Though they offer choice sacrifices,
though they eat flesh,
the Lord does not accept them.Now he will remember their iniquity,
and punish their sins;
they shall return to Egypt.

In today’s reading, we hear the prophet Hosea describing the sins of the Kingdom of Israel and foretelling the punishment they will undergo. They are condemned for setting up kings without the consent of the Lord. This had involved several murders and periods of misrule with great social inequality and little regard for the poor and vulnerable. There had also been continued worship of pagan gods and the superstitious practices involved with this. Hosea makes it clear that the offering of sacrifices is not sufficient to appease the Lord and that they will be held to account for their sins.

Pray today for those who feel unable to break free from the bonds of sin.