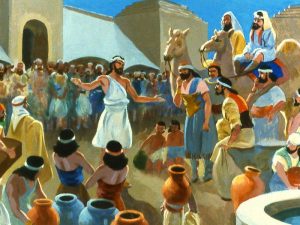 Now Nineveh was an exceedingly large city, a three days’ walk across. Jonah began to go into the city, going a day’s walk. And he cried out, ‘Forty days more, and Nineveh shall be overthrown!’ And the people of Nineveh believed God; they proclaimed a fast, and everyone, great and small, put on sackcloth.
From Jonah 3:1-10, NRSV

Jonah had been sent by God to go and preach to the people of Nineveh but had taken a ship  sailing in the opposite direction. When the ship sailed into a storm, Jonah was miraculously saved by being swallowed by a whale and spending three days in its belly. Having been rescued from death, Jonah was given a second chance to respond to God’s command to go and help the people of Nineveh. Despite his previous disobedience, it would seem that God still considered that Jonah was the right person for the task. This time Jonah was obedient to the command. He entered the great city and preached as he had been commanded; warning the people of their impending destruction if they did not show repentance for their sins. The response of the people and their king must have taken Jonah by surprise since they immediately responded and showed repentance. These so called “heathens” responded more readily to God’s word than Jonah himself had!

Welcome the chances that come your way today to show God’s mercy.