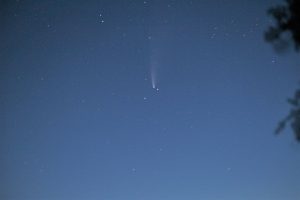 By happy chance, I discovered that a comet was to be visible in the northern hemisphere. Cue great excitement - and almost continuous cloud!

Watching the forecasts, a window of a couple of hours was promised so out I went, complete with binoculars, camera and tripod to see if I could find it. The fact that the comet, Neowise, was just below the Plough (Big Dipper) was a great advantage and it was soon located... not very big.. not very bright... but a star with a tail: a comet! Even better, after much faffing in the dark, I managed to get a few photos.

Looking into the comet more, I learned that it was last visible around 7000 years ago - and will not be visible again for another 7000 years ago. This is a powerful thought. It last visited this part of the solar system before any of the major religions emerged. Cultures were beginning to move towards agriculture - even growing crops in what is now the Sahara. There were no pyramids - no Inca, Aztec or Mayan temples - no African civilisations - few Australasian paintings - no cathedrals. What the people who saw this comet that our generation has called Neowise understood it to be, we cannot imagine. They left no writing and we have no real understanding of their cultures. Yet, they are likely to have had similar concerns to contemporary humans - family, relationships and ensuring that they were fed, clothed and kept warm (or cool!) And they probably told stories - making sense of the world and its wonders.

And this led, inevitably, to the thought about what the world and its peoples will look like in 7000 years' time when it returns. Will it still be called Neowise? How will languages have changed? Will humanity have continued its development of technology? Will there be a united, global family? Will humanity have visited other parts of the solar system? 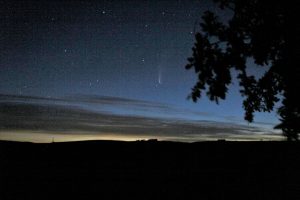 Reflections in the Wellsprings