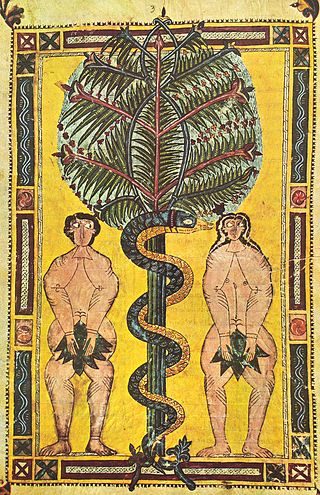 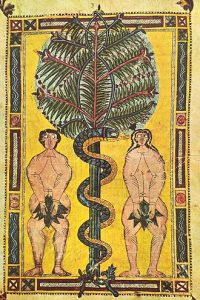 Now the serpent was more crafty than any other wild animal that the Lord God had made. He said to the woman, ‘Did God say, “You shall not eat from any tree in the garden”?’ The woman said to the serpent, ‘We may eat of the fruit of the trees in the garden; but God said, “You shall not eat of the fruit of the tree that is in the middle of the garden, nor shall you touch it, or you shall die.” ’ But the serpent said to the woman, ‘You will not die; for God knows that when you eat of it your eyes will be opened, and you will be like God, knowing good and evil.’
Genesis 3: 1-8, NRSV

No sooner have we heard about the creation of an ideal world and the perfection of the first humans than we hear about their fall from grace. Despite having everything that they needed and more, both the woman and subsequently the man are led into disobedience, and both eat from the tree that had been prohibited by God. Immediately something changes and they become self-conscious of their nakedness. They no longer feel an innocent joy in each other but need to hide behind fig-leaves. They also feel that they must hide from God. It would be easy to dismiss this as a story that belongs to a time long forgotten, and yet when we think that we can make our own rules instead of following what God wants for us, we can also separate ourselves from each other and from God.

Pray for discernment about decisions or choices you are facing.