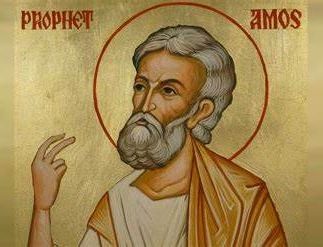 Then Amos answered Amaziah, ‘I am no prophet, nor a prophet’s son; but I am a herdsman, and a dresser of sycamore trees, and the Lord took me from following the flock, and the Lord said to me, “Go, prophesy to my people Israel.”‘Now therefore hear the word of the Lord.

It is not surprising that the words of the prophet Amos addressed to the people of the northern Kingdom of Israel were not well received. Amos was called by God to deliver a strongly worded message of the doom and punishment that were to befall the people as a consequence of their sinfulness. The message was all the more difficult to bear because it was brought to them by a “southerner” from the divided kingdom. Amaziah the priest took particular exception to this “outsider” coming to make such a proclamation in his national temple. He as good as accused Amos of conspiracy and ordered him to go back to his own kingdom. In response, Amos made it clear that he was not acting from his own choice but because he had been sent by God. Amos was not a “professional” prophet such as those attached to some courts, but had earned his living as a farm worker. He was uprooted from this life to prophesy as the Lord required.

Pray for those whose ministry requires that they sometimes have to deliver unwelcome messages to people.